What We Remember/What We Forget 2014 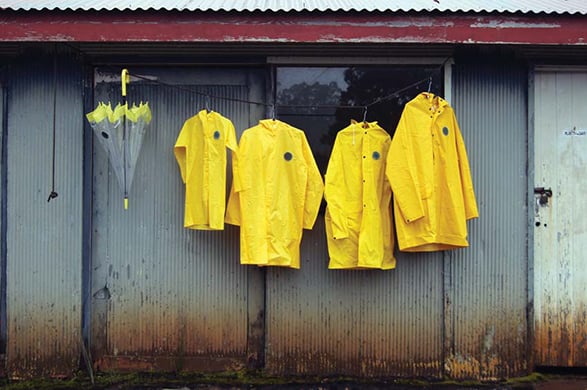 Amanda Shone works closely with people and spaces to emphasise the things that go unnoticed, but once evoked, are hard to shake. Her work suggests that our unconscious gestures reside in the undercurrents of culture, and seep into our relations with space and others to draw on a history that honours the past, but speaks to the future, and yet to some, remains invisible. The physical body, and its response to space are key to Shone’s work, and in #VacantGeelong she addresses the dramatic socio-economic and cultural changes prompted by Geelong’s transition to a post-industrial city. Iconic Industries has seen Shone make a number of architectural interventions into the supposed redundant spaces of industry, but pointedly, she has responded to the people, and their cultures, that shaped this city.

Drawing on embodied recall from an ex-worker (Brian) from the car industry she re-inscribes gesture in video sculptures, projected onto glass panels that resemble the actual assembly line. These ghostly images bring to mind the nature of labour enacted over a lifetime, and the physical investment of the person and the machinic nature of their gestures into the production of vehicles.  Working closely with Brian, who worked for a Ford spare parts wholesaler (no longer operating) Shone has garnered arcane and obscure memories conjured through association – audio and video that re-stages the day to day experience of a soon to be forgotten industry.  Enhanced by metronomic audio, her work poetically evokes the segmented time and space of industry, while reflecting on the communities that grew out of (and continue to prosper) Geelong’s golden industrial age. 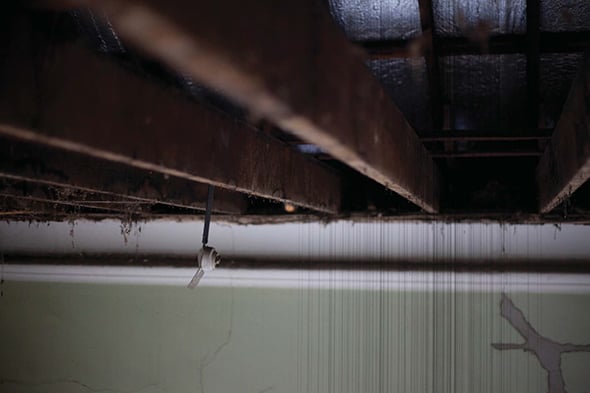 Navigating the threshold between what we can and can’t see, Duyshart’s site-specific spatial practice is an intuitive investigation charting the physical and psychological resonance innate to space and in relation to its viewer. In contrast to the heavy materiality of Geelong’s disappearing industries, it is the ephemeral mediums of sound and smell that intimately evoke the poignant sense of place and space. Often overlooked and forgotten, they are now brought to the forefront.

French philosopher, Henri Lefebvre describes ‘space’ not as the stable and static location of ‘place’ but as a continuous social dynamic that is produced for example, within the synthesised landscape of a factory. While space manifests itself through the temporary anchor of ‘place’, even when ‘place’ has gone “in space, nothing ever disappears”(1). It is in the affective nature of sump oil that Duyshart conjures place for #VacantGeelong . The deep bass resonance of sound produces a pulse in the surface of the oil, and it is there that we find our own rhythm, through sight, smell, audio and heart beat, we are close to the work and he history of the place.

Vibration possesses uncertain boundaries, which hesitate, quake and induce perplexity. Collapsing the distinction between the material and immaterial, the transformative quality of vibration inherently engenders change and produces new space. However “…space does not consist in the projection of an intellectual representation, (nor) does it arise from the visible-readable realm, but first of all is it heard (listened to) and enacted through movement. 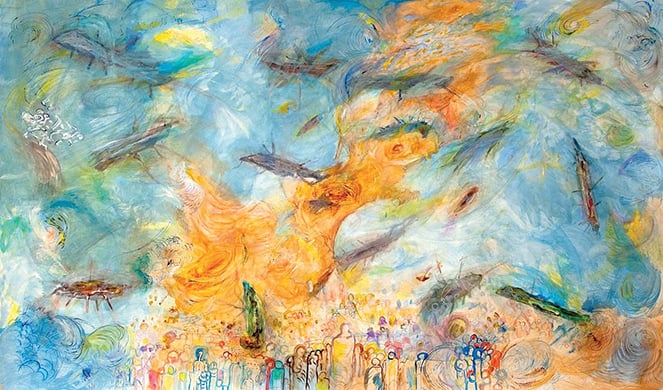 As an art historian and artist Robert Mihajlovski’s practice brings a visual focus and tenacity to the #VacantGeelong project. His prints and image interventions are powerful traces of old, and in some cases, still functioning, industry, including sites around Nth Geelong and Corio. His large format mixed media paintings explore the themes of the post­industrial city not from a static notion of place but from the mobility and migrations of colours, people’s, artefacts, cultures, and ideas.

His industrial scapes are visual memories evoking not only the temporality and ephemerality of the existence of those who (local and émigrés) once inhabited the workspaces of the area, but also the evanescence of their dreams. In his contemplation of the industrial scape, the artist filters the light and colour according to the graduation of his passions, as the latter are affected by the memories of a grander past. By focusing on the architectural monumentality of the factories, silos, warehouses, and foundries, the artist reminds us here that survival is subject to the industrial environment, or, in other words, to the resilience of the proletariat (to consume their lives for the benefit of capitalist creed in a new land and future). In this way his style befits this nostalgic album of socialism and displacement that shifts first from pictorial realism, and delves into post-constructivism – as is manifested in structural monumentality and compositional rigour of the factories (centres where materialism is created by way of de-humanisation). The artist, as an émigré, equally affirms himself as a renegade and non-conformist and reconciles himself with his life’s artistic purpose. His works are interpretations of the last industrial museum. 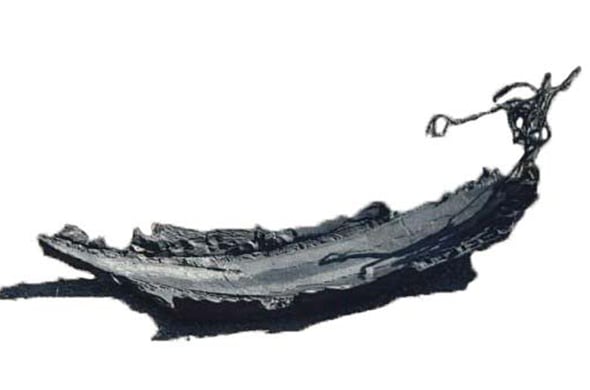 Through her work with the New Wilderness Project, Merinda’s interest in the new urban agenda of ‘placemaking’ aligns with engaging in ‘social practice’ and the aims of the #VacantGeelong project. She is interested in both the documented experiences and in an archaeology of the present, that focuses on exploring intersections between art and life, so that the processes and works co-created by participants are relevant, transformative, sustainable and evolving. Her work has encouraged Deakin students and community members from a variety of discipline areas to become involved at the coal face; exploring, developing and applying their creative skills in ‘real life’ contexts and exhibitions. Kelly also employs social media platforms to create networks for additional connection, participation, action and project sustainability.

For NWM Kelly will record and re-order the memories of participants, by using objects mined from Geelong’s industrial past and communities to prompt reflection and re-imagination. In an object based sound work a group of old worker’s lockers store old boots, voices and trinkets from people who actually used them. They are more than museum pieces – they resonate with the social histories of the spaces they sat in. Kelly’s fluorescent cylinders capture light and objects. Collected in using a methodology of pop-archaeology Kelly mines the contemporary, or the recent past, to find the obsolescence of the object, and to question our consumptive practices, spurred on as they are by a desire to accumulate – she finds the emotion trapped in the discarded object. The use value comes in the remembering. 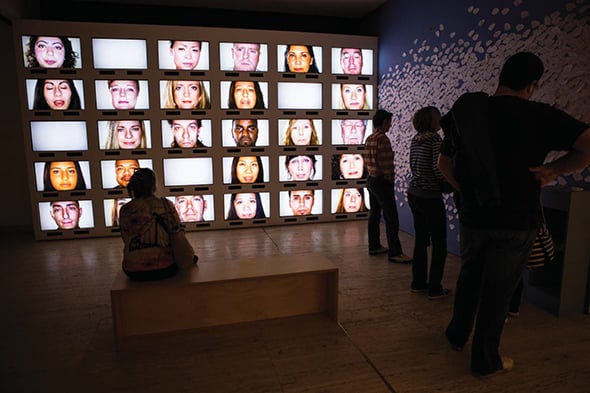 Cole Chocka’s work often references her life story and experiences, such as her Wadawurrung heritage, the importance of Christianity in her life, and the impact of politics, the law and other power structures on her lived experience and that of her family and community. Her deeply personal and powerful artistic practice questions the way people circumscribe and misconstrue contemporary identity and experience. For #VacantGeelong she has researched the site of the old Ford factory to make comment on its continued impenetrability and iconic status as a building that remains. For most people on their way to the coast, when industry was thriving one could only imagine what was going inside the vast factory spaces of Geelong. For the most part, outside of research projects like #VacantGeelong , we are left wondering. Apart from interviews with ex-workers and some stock footage and tour photographs there is scant documentation of the Ford site. Even now as a redundant space, no longer used for making cars, it is inaccessible and frozen in time – perhaps for many years to come.

Cole Chocka has responded by creating an seemingly forever multiplying series of boomerang videos from around the Ford plant. She captures incidental views as if they are security footage, woven together, and timeless in their repetition. In postproduction, and in the stitching of the images, she began to notice how the forms in each video corresponded. In multiplying and bringing the boomerang videos together, she constructs an island, remote, but surveilled – with resonance to our contemporary capturing of “otherness”. The workers are gone, so who exactly is to be captured in this space? Spectres. 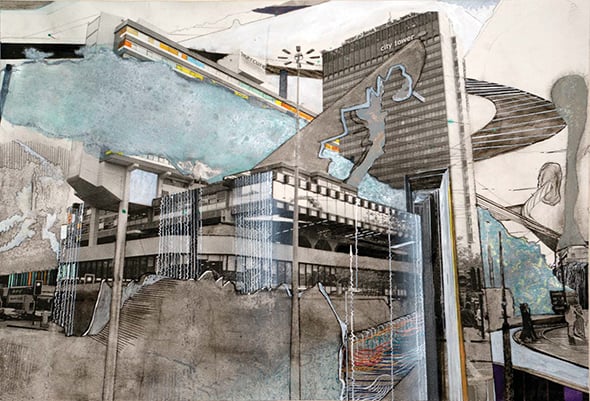 Alexander Hamilton’s works focus on the exploration of the Ford site – its physical and iconographic presence on the Geelong-Melbourne road. Hamilton works with real, ordinary and mundane sites, through photographs and typographic details. He extracts from and inserts into the visual and textual imagery of these sites parallel worlds. Related artwork, theories and philosophies, are layered in carefully considered lines and techniques. The process of his works points to the conceptual framework of the #VacantGeelong project. Erasing, revising, inserting, adapting, extending and expanding the ‘real situation’ into imagery of its deeper or supra real situation. These are the realities that co-exist with and alongside the reality that is made apparent. Erasure, and the complexity of memory and forgetting, are instilled in these works and bring to the foreground the beauty of a palm tree or a concrete lintel that you may have passed everyday of your life but have not noticed. Hamilton’s method of modifying the textures, the static elements, and reorganising the space, convey an emotive and psychological translation of the everyday urban experience, sometimes fantastic, sometimes disconcerting. In one of the larger paintings, Hamilton excavates the energy of the Ford sign as a ‘driving’ landmark through decades of motorisation, both those passing on the Melbourne Road and those manufactured within the factory behind the sign. This is powerful visual imagery that lingers in the mind and memory of new audiences, as much as audiences familiar with the site.

This project provides a creative exploration of Geelong’s industrial identity, and a collaborative interface between architecture, art and community. Its intent is […]

The #VacantGeelong research project on Geelong’s vacant industrial space has moved into its next stage. Deakin University’s #VacantGeelong project  presented a symposium this […]